Alpine is the climate in the mountainous areas (so high where the trees no longer grow).

High territories have colder climate and the temperature difference between day and night is larger than in nearby lowlands. This means that Alpine areas are kind of similar to other climate zones that are available further inland an further from the equator. That is a mountainous location in Tropical climate may have a climate more similar to Continental one, for example.

However, the daylight duration and seasonal temperature variations remain as they would be in the nearby lowland territories. Therefore in the highlands near the equator the temperatures do not change all year round, although the average may be 10 C or 20 C rather than 30 C. 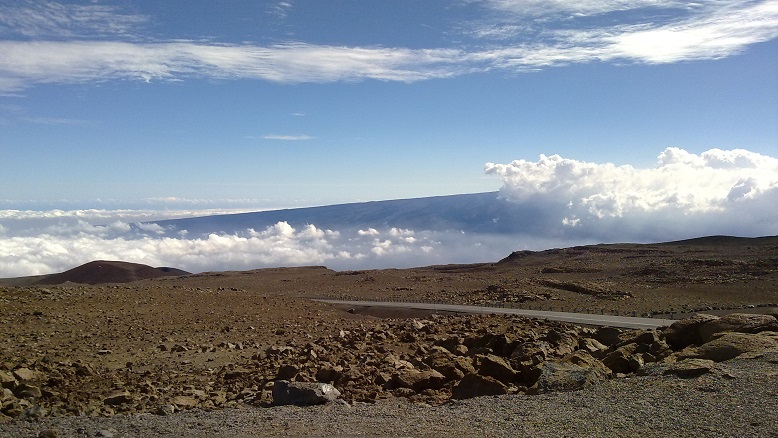 Looking from above the clouds. The lowland areas are Tropical humid but at this altitude it looks like tundra (Mauna Kea, Hawaii)

Moreover Alpine territories have some unique features. The oxygen supply and air pressure is lower there; at 2000 m there is 80% of sea level oxygen, at 4000 m – 63%. A person who quickly accends to Alpine territories from the sea level may feel fatigue quickly and develop health problems (lethal sometimes). As such acclimatization is recommended. Another hazard is UV radiation from the sun: with every 1000 m gained it increases 10%-12%, therefore sunscreens are a necessity.

The fauna and use of alpine territories depends on where they are located. In the Equatorial and Tropical territories the coolness is highly welcome so many cities are located in Alpine territories and they are good for agriculture, even at the levels of 3000 or 4000 m. Farmers build artificial terraces to make small level locations for growing crops. These are not Alpine however: as the climate is only considered Alpine above the tree line the further from the equator the lower the Alpine-proper climate starts.

In temperate climates only the lower Alpine territories (~2000 m) are still densely populated with only ski resorts available higher up. Active tourism, including hiking and mountaineering, is now among the most popular uses of the Alpine areas, but seasonal grazing by domestic animal herds has been common for centuries.

In Subarctic and similar areas mountains are devoid of population and the few towns that exist stand at the sea level.

The Alpine territories are characterized by quick changes of elevation. The views may be stunning but building roads is costly and requires serpents and tunnels. Driving such roads takes more time than elsewhere.