Australasian cities are all new. The oldest buildings date to the 19th century but most are far more recent. They are cities of immigrants: most of the inhabittants, their parents or grandparents moved in from countries thousands of kilometers away.

Most of them are whites of British origin. All the cities have been established by British colonists and prior to some 1960s non-white immigration has been limited while British migrants encouraged. Today however the bulk of immigrants are Asians; they already make ~15% of urban population. Chinese and Indians are especially numerous, their languages now prominent in public signs. Asians have displaced the pre-colonial populations (Australian aboriginals and New Zealand maoris) as the largest racial minority. Historically discriminated the precolonials have many problems, including poverty, alcohol abuse, crime and obesity. City is a relatively new form of life to them as most moved in during the recent decades. They belong to various tribes and nations and are not a single ethnic group, but their languages are endangered. Other broad minorities are the Wogs (people of Mediterranean origin) and immigrants from Oceania for whom Australasian cities are the nearest metropolises to study and climb the career ladder.

Even in the largest cities the atmosphere is laid back; the dress code is largely casual. Some people even walk barefoot.

Religiously the Australasian cities are Christian, but there are multiple denominations (Catholic and Anglican the major ones). The religiousness have been decreasing over the recent decades, however the Asian religions increasing and establishing their religious buildings.

The massive immigration fuels the Australasian city expansion, population doubling every couple of decades. That’s why most districts are recent and mid-20th century buildings are among the key landmarks.

The population density in the countryside is low however thus the metropolises are very from each other. They are connected by largely empty roads through the wilderness. Intercity cargo is carried by “road trains” – extremely long trucks.

Metropolises have skyscrapers and traffic jams but the small cities are largely single/double floor affairs. Working hours of all establishments may be limited there. Pub is a traditional local business to provide cheap accomodation, food and alcohol; many of them are wooden and date to the pre-WW1 era. 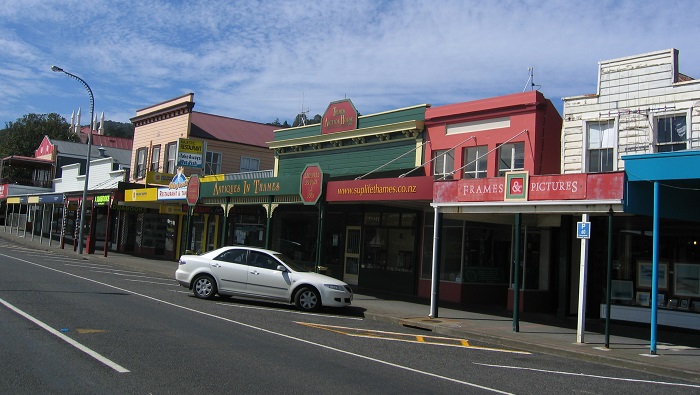 Storefronts in the center of a small Australasian city (Thames, New Zealand)

Australasian cities never suffered a war or revolution. In spite of this tens of thousands locals died serving the British Empire in World War 1 Middle East. Nearly every city thus has its own World War 1 memorial and celebrates ANZAC commemoration day.

Favorite sports include Australian rules football, rugby and cricket. Games against other parts of the former British Empire are of special importance.