A North African city is centered on its Medina, a downtown of extremely narrow labyrinthine streets where cars are replaced by motorbikes and donkeys. This is a large marketplace with plain outer facades and separate district for different goods. 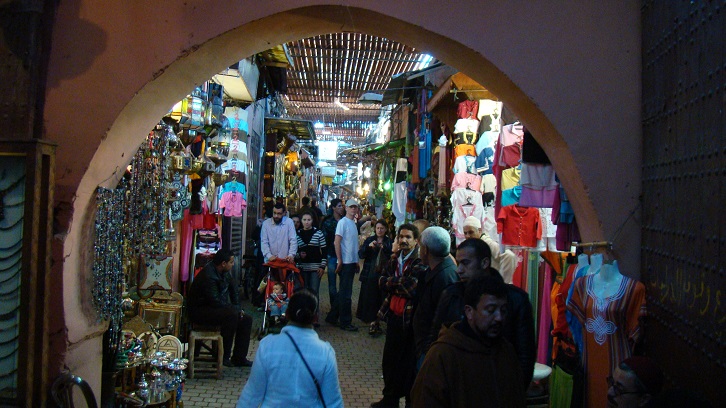 Medina, the downtown of trade (Marrakesh)

However the internal courtyards may be opulent. People of different social classes live in Medina as there is no tradition for the rich to move out. Instead, they decorate their own “riads” as palaces but this is visible only for the ones invited in. Roofs replace yards. Among the nicest public buildings are old mosques and religious schools.

Most businesses are family-owned and the trades are passed generation-to-generation. There are no franchises or trademarks; much is done via personal relations and haggling is universal.

Outside of the Medina there is a 19th century district dating to the era of European colonialism. Adhering to European architectural practices such area is full of various revival style buildings and is the new commercial hub of the city. It has churches built for the European communities. Many of them are now derelict as once bustling European communities departed after the North African independence (1920-1960), leaving most of the cities 90%+ Muslim (Sunni Hanafi) and Arabic (with Berber and Black minorities moved in from the south).

19th century districts in Morocco are known as Villa Nouveles. Tanger (left) and abandoned church of Casablanca (right). Trikes are just one of many means to navigate tight medinas.

Religion is important to the people. Muslim call for prayer is audible all over the Medina and new districts and some pray in streets. Secular people are few and far between yet they wield a dysproportional political influence.

Despite the end of colonialism the former colonial languages (French, English, Spanish, Italian – depending on area) are still popular in tourism, science and higher education. Many locals seek to emigrate to the former colonial power where the economy is better.