A Latin American city has a historic center dating to the colonial era (16th-18th centuries). It is based on a rectangular layout. One central area is left as a small park. This is called “Plaza de Armas” (Weapons square) as it used to be a refuge for city dwellers under siege.

The Plaza is surrounded by main historical civic buildings. The most lavish amongst them is a large Baroque Roman Catholic church (cathedral). Monasteries and government palaces come second. Building fronts with open arcades allow walking in the centers shaded from the hot sun. 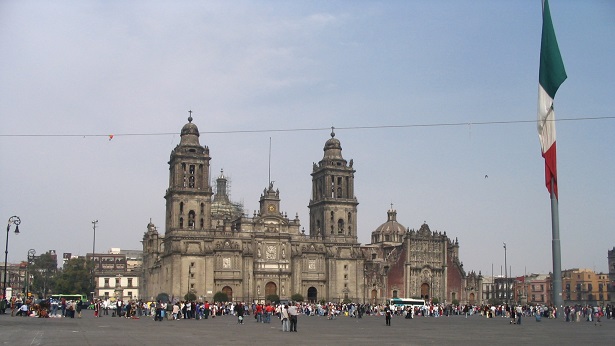 While the colonial center may interest tourists the most it is rarely considered the best ones to live at nor are they centers for commercial activity. Many glorious buildings there are crumbling in disrepair. Interestingly this makes Latin American historic districts more authentic than their manicured Western European counterparts.

Instead of restoring historic centers the modern elite live in their own districts where they build large new villas surrounded by barbed wires and electric fences to save them from high crime rates. It is common for the rich to employ servants as the labor is cheap.

The downtown of Santiago de Cuba

The economic hub of the city is 20th century commercial downtown full of modern high-rises and wide avenues. This is the place for entertainment, shopping, best hotels and offices. Much of what is on offer here could only be afforded by the more affluent minority, the rest opting for cheaper shops and services in single-floored buildings.

Most Latin American cities are surrounded by large slums, variously called “favelas”, “villas miserias”, etc. These were hastily constructed in mid-20th century when population growth was rampant and millions of villagers moved in, erecting themselves shacks on suburban land. Joblessness, illegal activities and other problems plague the slums. Their dwellers put strain on local infrastructure by stealing utilities. People not living there rarely dare to enter the slums; in addition to the risks there is simply no need for it.

While a large share of their inhabitants may speak Native American languages natively, the interethnic communication is in colonial languages (Spanish). Education, media, culture and other activities are also exclusively Spanish, leading Native American urban dwellers to completely abandon their languages over generations. In addition to the Native Americans the Latin American cities host White and Metiszo (mixed White/Native) communities, the last of which is usually the largest. Black descendants of imported slaves are a minority.

Roman Catholicism is the dominant religion in each of the main communities and the religious fiestas are important events.

Football is the most followed sport.