The cities at the Gulf have been completely transformed in the recent decades on the oil wealth. Before the oil extraction began ~1970s all of them were small insignificant desert outposts. Since then the population of Gulf cities imploded 10 to 40 times, doubling every decade or so.

Local Arabs are now a ~10-40% minority, although they still hold exclusive citizenship and control the hereditary governmental institutions. Most of them wear the traditional white (men) and black (women) dress.

The majority of population are immigrants who entered the country on temporary labor contracts. Whites usually serve as executives, while Indians, Pakistanis, Filipinos, Bangladeshis and East Africans do menial labor and own small businesses such as shops and ethnic restaurants. Most immigrants are men sending remittances to their families so men outnumber women 2 to 1 or more. Due to large numbers of immigrants English is widely used in addition to Arabic language.

Construction is an important industry as the rapidly expanding cities build grander and grander buildings. The only old building in the city is likely an old fort that used to be the defensive hub in these then-fierce lands. Still holding a comandeering position in 1960s these forts are now literally dwarfed by modern skyscrapers. 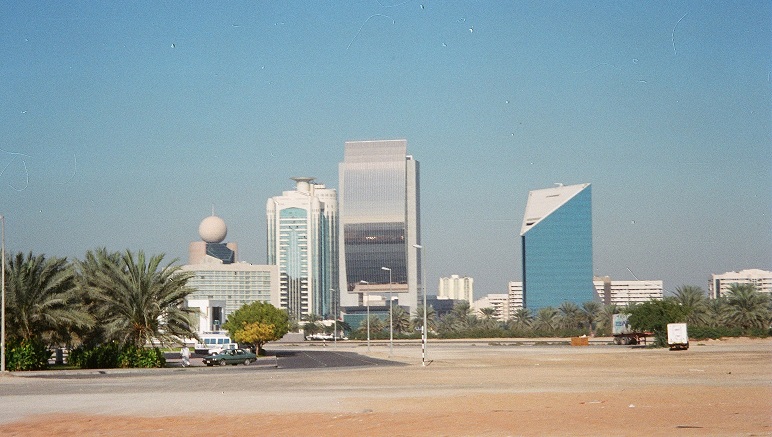 Every city has constructed something with the aim to be unique all over the world. Some of the tallest skyscrapers and fountains, largest malls, indoor ski slopes, art museums, airports and fastest theme park rides are now located in the Gulf Cities, all created by world-famous designers, incorporating both postmodernism, global perspective and bloated local styles. Poshness is as important as size and the cities have some of the world most expensive hotels, gilded interiors, etc.

All this caters not only the rich local citizens and expatriates but also millions of tourists. After the oil ends the Gulf is expected to live of tourism. To attract visitors many world class sports events and exhibitions are held in the Gulf Cities, while the powerful local airlines use advantageous geographic location to offer Europe-Oceania, Europe-Asia, Africa-Asia and other connections. Free economic zones and tax havens are crafted to invite international businesses.

Islam is the state religion and massive state-funded mosques, new like everything else, competes with skyscrapers for skyline. Many immigrants have other faiths but these are practiced at home with no religious buildings. Alcohol use is limited, in some place the sale is entirely banned. Open clothes even where permitted are associated with a loose way of life. Cities are very safe.

Summers in the area are extremely hot so the life largely takes place in vast heavily air conditioned building interiors. Efficient cooling is considered a must and even some bus stops are cooled. 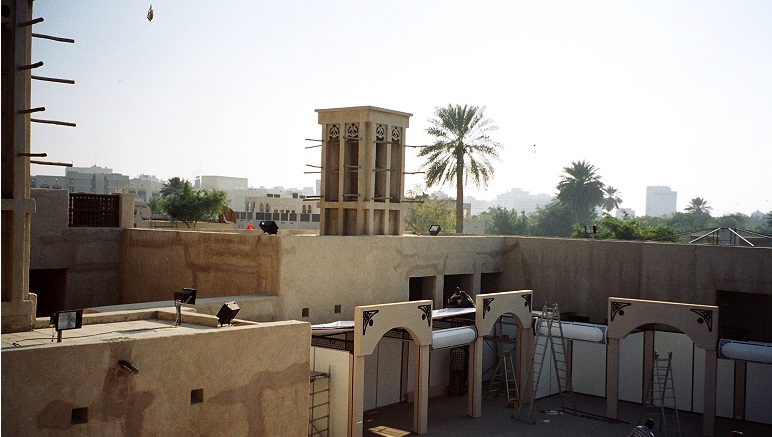 An old fort with towers to capture wind (Dubai)

Nevertheless the public transport barely exists, people prefering their own overtly-clean cars or taxis. Parking is abundant and streets are wide, many of them named after various members of the local ruling families. Large pictures of these nobles overlook many streets together with modern advertisements.

Built in the desert all undeveloped areas are full of sand but there are many plants and good irrigation systems in the developed areas, just one of many Gulf Cities’ expensive technological feats.

Some institutions are gender-segregated, for example the education. Traditional souks, never of the size of North African medinas, have been largely displaced by the new malls.

Traditional forms of entertainment enjoyed by the locals include falconry and camel racing. These are now joined by football and cricket imported by immigrants.